An In-depth Look At the Arcuate

The arcuate serves no practical purpose other than to act as a differentiator in the marketplace. The most common and recognized being the double “seagull” or “batwing” design used by Levi’s. Still, some brands incorporate their design into an aspect of the jeans construction – the reinforcement of pocket linings for example. 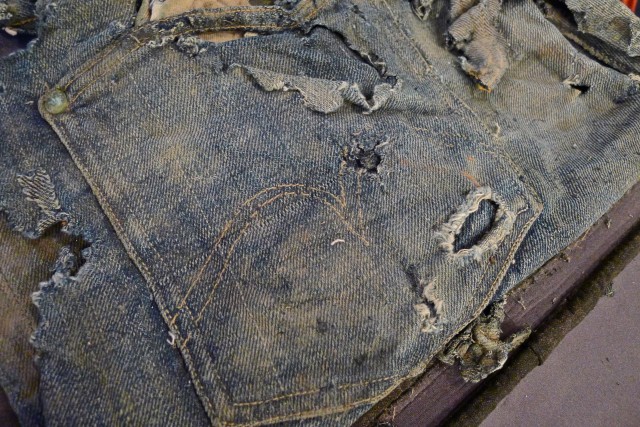 Like the entire history of blue jeans, the arcuate is inherently intertwined with Levi’s.

According to the information available to the Levi’s historians, their first “waist overall” introduced in 1873 featured arcuate stitching design on the single back pocket, a watch pocket, a cinch, suspender buttons, and a rivet in the crotch.

It is not known if this was an idea exclusive to Levi’s or if it was commonplace to see some kind of design on the rear pockets of mass produced garments and workwear. It was not the arcuate that set Levi’s apart however, it was the riveted stress points in the jeans. This one idea by Jacob Davis allowed Levi’s to come to the fore in the field of workwear at this time. 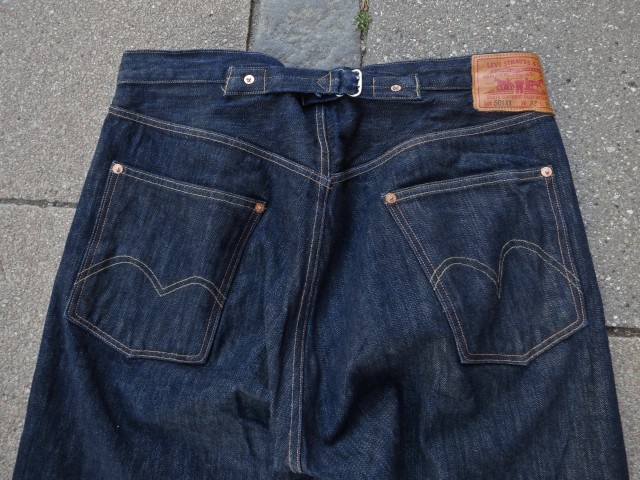 In the early days, the arcuate on the Levi’s jeans consisted of two parallel lines in a double arc. Although Levi’s never described their arc as having a design reminiscent of anything, because its origin was lost along with the historical records in the earthquake and fire of 1906, they are commonly referred to as reminiscent of a seagull in flight.

At this time jeans were probably not manufactured at a centralized facility. Rather, research hints that they may have been produced in a combination of factory manufacture and sewn in the private homes of people contracted by Levi’s – a common practice at this time.

Due to this, the accuracy and consistency of the arcuate on the pocket would depend entirely on the skill of the individual operating the sewing machine. 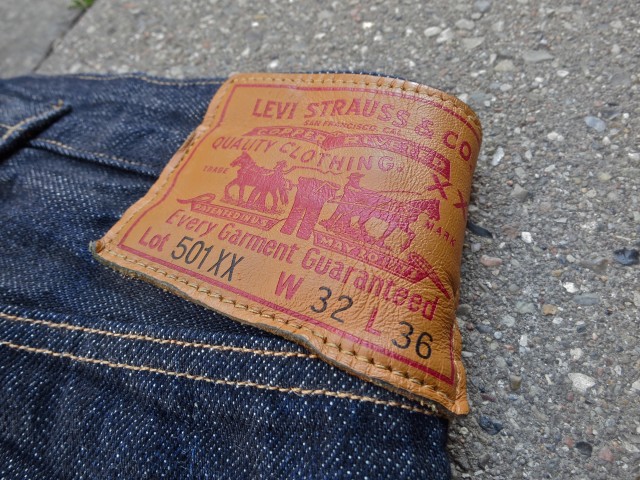 Competitors of Levi’s also featured similar or exact copies of the design on their jeans and work trousers.

For the first 17 years Levi’s set itself apart from the competition with riveted construction, a design detail for which they owned the patent. Recognising that the patent on the rivet design was to expire around 1890 Levi’s chose to seek differentiation in a different manner.

In 1886 the famous Two-Horse leather patch was introduced. Prior to 1886 the leather had the company name and language about the Patent Riveted Clothing.

The Two-Horse patch shows a pair of Levi’s jeans stopping two horses from tearing the pants apart. This was to impart the notion that the jeans were tough and unbreakable, a reputation the Levi’s had justly earned with the riveted design. Although after 1890 the competition were allowed to rivet their clothing and also featured the arcuate, Levi’s chose to keep the design as it was synonymous with their brand and reputation within the marketplace. 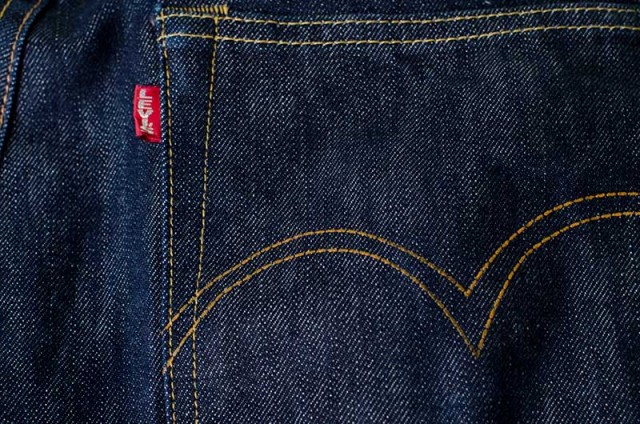 The Establishment of Icons

When rationing on materials was introduced during World War II, Levi’s was forced to abandon unnecessary features of clothing including the crotch rivet, cinch, rivets on the watch pocket, and naturally the arcuate as it was decorative only. Levi’s felt that the arcuate was so intrinsic to its image that it had the sewing machine operators paint it on.

It was not until 1943, however, that Levi’s registered the arcuate design as a trademark. This meant that no other company could use the design or similar design. Levi’s trademarks also included the red tab and the leather patch design. 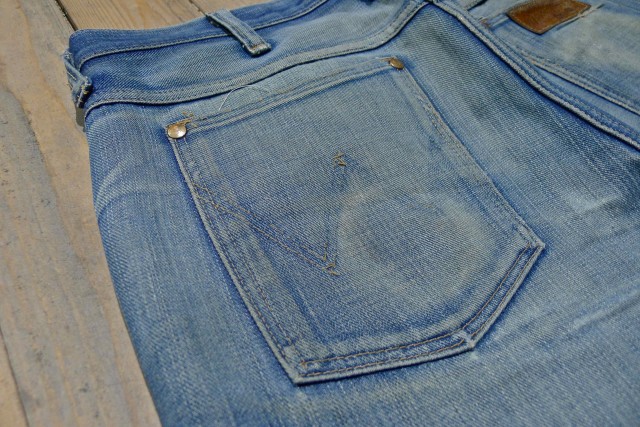 Due to the new Levi’s trademark we see the main competitors introducing their take on the arcuate. Lee introduces the famous “lazy S” in 1944 and Wrangler the “WW” Arcuate design in 1948. Unlike the Levi’s arcuate, the rationale behind the designs of both the Lee and Wranger arcs have not been lost to history. The lazy S is reminiscent of the longhorn cattle horns and the double “W” stands for Western Wear.

We know that in 1947 double needle machines were introduced to stitch the arcuate onto the back pocket of Levi’s jeans, resulting in the famous diamond shape in the centre as well as a much more consistent quality. 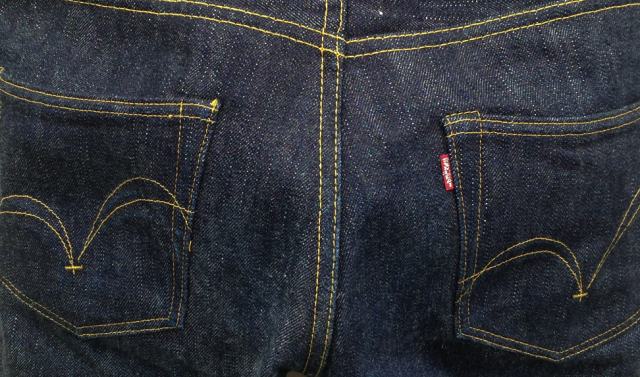 The Arcuate in Debate

During the last half of the 20th century fashions changed.

The role of jeans shifted, but there was little real change in the established order in regard to the arcuate. At times the lazy S became more pronounced or the Seagull design became shallower – but the basic design has remained unchanged. It was only in the early 2000s that the arcuate again became a topic for discussion.

The debate has its roots in the denim culture of Japan and Asia – as well as the explosion of premium denim onto the fashion scene at this time.

Since the end of World War II, the Japanese have been fascinated by Americana and the American culture. Levi’s are, of course, at the heart of this, and vintage jeans would be bought up in the US for a pittance and sold on in Japan for a huge profit.

The fascination with vintage Americana lead Japanese companies such as Warehouse and Evisu to create exact replicas of famous Levi’s cuts. These replicas were exacting in every detail to the number of stitches per inch, denim construction, the colour and thread choice. And, of course, the arcuate was just as faithfully replicated.

When the premium denim scene started to take flight many agree that Levi’s missed the boat. While premium denim brands were selling in boutiques for hundreds of dollars, a pair Levi’s were to be found at $30 a pair in Walmart. The low cost naturally had ramifications to the quality and Levi’s reputation suffered accordingly.

Levi’s fought back at this time by going after US brands and stores that in their eyes were cashing in on the history of Levi’s by imitating either the arcuate design, the placement of the red tab or the leather patch design. Dozens of lawsuits were filed in the US preventing the use of anything remotely similar to the seagull arcuate.

Though must have caused a few sleepless nights for the recipients of the lawsuits, it did create an opportunity for the brands to find their own defined brand differentiator. As Kiya Babzani, founder and owner of Self Edge, reflects in his interview for the documentary Warp and Weft:

“I think it was good for the Japanese brands to go through this. A lot of them had done these amazing innovations in denim, amazing reproductions paying really close attention to every detail. But when it came to the branding it was just slap on the Levi’s arcuate, put a red tab on it, put a Levi’s leather patch on it and change the words. This forced them to think outside of that.

As soon as that happened, a lot of the companies that were named in the lawsuit they started doing all sorts of different designs […]. The lawsuit really brought us closer with these brands and they came out with a style of product that is unique to that brand. As opposed to having the same branding over ten different brands of jeans.”

Today, the arcuate remains an important but not essential part of the denim culture.

Many of the recognized manufacturers that are leading the charge in raw denim these days feel that they do not require an arcuate. They would rather stand by their reputation for quality and craftsmanship.

With so many manufacturers out there, it can be difficult to come up with an original design that appeals to people. Above are a few of our favourites, why not share pictures of yours with us in the comment section below.