Custom-made jeans are, for many a denimhead, the Holy Grail. Buying them has never been easier but the web has opened up as many pitfalls as it has possibilities.

At the budget end, there are several online companies out there offering configurable tailoring. The denim is usually run-of-the-mill and the worrying lack of company details leaves us wondering about the conditions the jeans are made in. Come on, at $49 a pair, someone must be paying a heavy price and, if that is not the customer, then who?

Yeah, we can hardly contain our apathy either.

The European market is an entirely different proposition. Premium tailors like Paul Kruize have graced these pages in the past and are proving themselves by competing in the Denim World Championship.

There is simply no question that, for approaching €600 / $670, you are wrapping your loins in world class craftsmanship but, seriously, there are only so many kidneys that the committed denimhead can sell off to fund his obsession.

Rewind to 2010. Imagine a street food stand in Bangkok and a chance encounter between two style-conscious Stockholm natives who, quite independently of each other, had decided that Sweden just wasn’t doing it for them any longer. Meet Johan Blom and Jannis Hoff, founders of SOSO Clothing. Johan told us more about how SOSO came in to being.

When we met outside a small food cart in the middle of Bangkok, we had no idea that we were gonna end up running a clothing business together.

It was during a taxi ride that we both discovered how annoyed we were that prices of clothing had become more expensive and we both wanted to try making stuff ourselves. We started out with t-shirts which ended up being liked by our friends and this gave us the confidence to take it to the next stage.

We actually stumbled upon denim by coincidence since a mutual friend was studying graphic design in Bangkok at the time. His teacher introduced us to a supplier of Japanese denim and we became hooked from the first model, ”FIRST”, that we introduced and released in a limited batch of just 100 pairs.

This has now turned into us striving to create the world’s largest and most affordable custom-made denim company. It is all about having a fair price-point together with quality materials and fine craftsmanship.

In terms of design, it kind of hit us that all denim looks basically the same. Same thread, same hardware. That’s when we asked our factory if we couldn’t come up with some kind of new thread since we’ve always loved the thread color of the Swedish Nudie Jeans.

That was the time that we really started thinking about questioning everything.

The SOSO mantra is that everyone should be able to purchase a pair of unique, custom-made denim jeans without spending a fortune.  Being based in Bangkok certainly helps them on their way with this; although Johan and Jannis have carefully seen to it that their product is manufactured responsibly and in a safe, healthy environment, it is a fact-of-life that living and labour costs in their neck of the woods are markedly lower than in, say, Western Europe.

Getting Down To Brass Tacks

The current product range features some fifty weaves from A-list Japanese mills and emerging Chinese denim houses. This is being expanded to around 100 fabrics of different weights and from even more mills. There are six basic cuts; these range from skinny to boot but variations on these are always possible so that the exact, desired fit is achieved.

Then there is a choice of over twenty different thread shades together with fly- and selvedge-detail options, and an exquisite veg-tanned patch if that’s your thing.

We have just begun road-testing a pair of SOSO’s super-heavyweight 23.5 oz. monsters and these sport the selvedge fly as well as a folded coin-pocket which we think is a really nifty touch and fits with their approach to customisation. Is all about subtle refinement rather than full-scale revolution.

That said, it is quite possible to over-do it with the bells and whistles and, in the resulting chaos, lighting up like a selvedge Christmas tree. In a word: wrong. 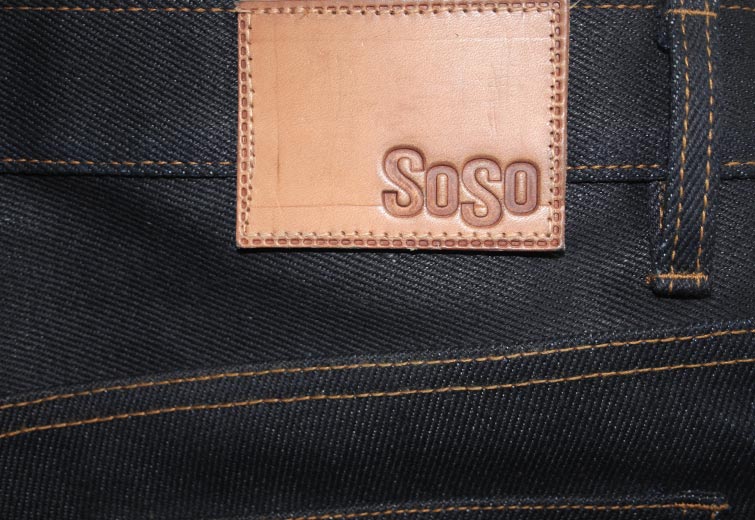 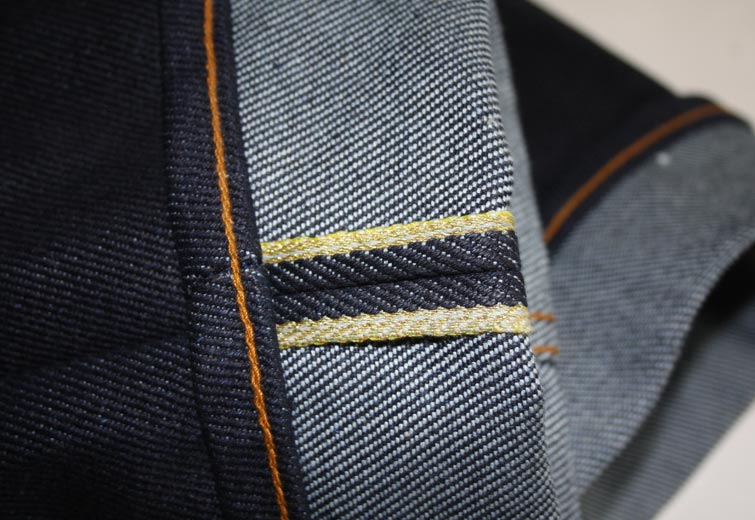 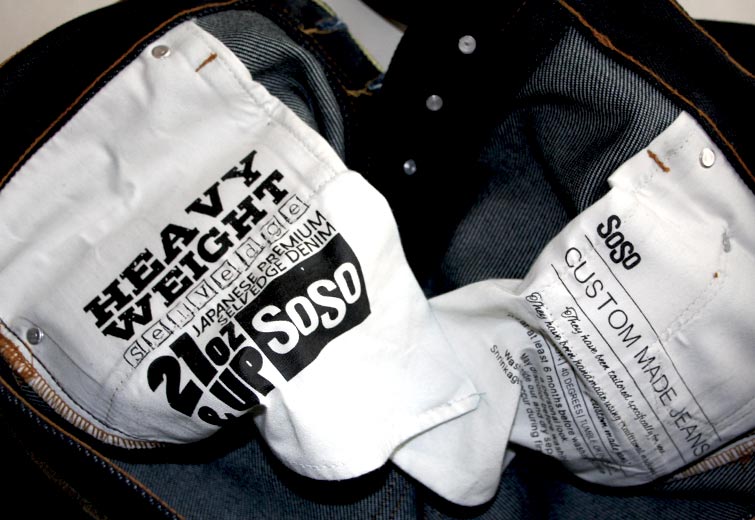 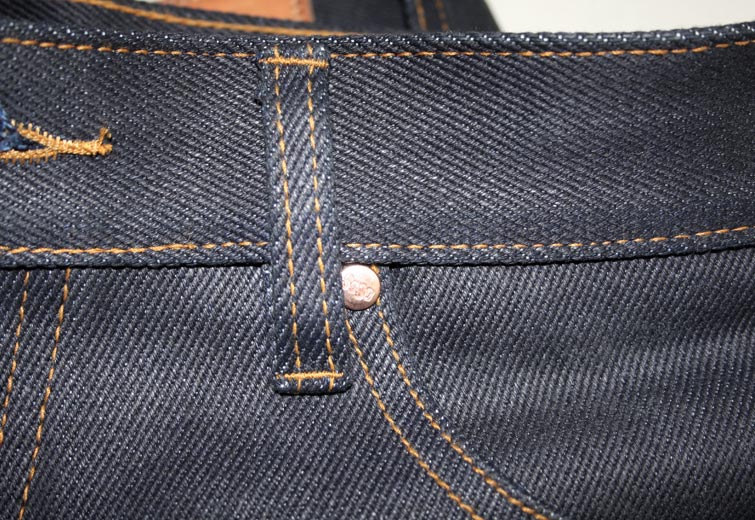 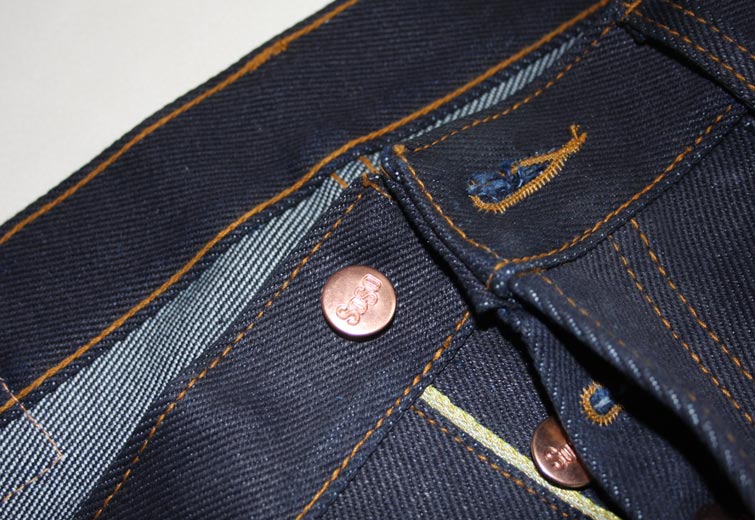 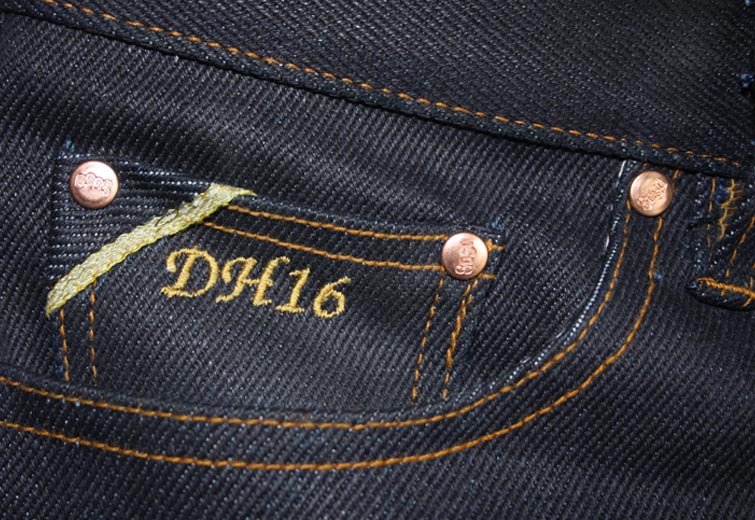 We will report back once our 23.5 oz pair have been put through their paces but early impressions are extremely favourable. They were cut exactly as we spec’d them and they have been sewn and hemmed with neat, tight precision.

The branded copper hardware feels stable and secure, and of course, the denim is as stiff as a teenager and as rough as a bar room brawl. SOSO themselves describe it as “seriously bad ass” and it is hard to disagree.

If we are being picky – and that is only reasonable when we are talking about a $250 garment – the fly button-holes are just a tad too tight. You need Godzilla thumbs to close them up. Also, we would have probably sewn the patch just top and bottom so that a belt can be passed through. Why would anyone want to hide such a thing of deliciousness?

On the other hand, the hand-printed pocket bags are a really cool rock n’ roll touch. They hark back to the 1970s where the designer’s art was to chuck as many typefaces at the work as possible…

Show Me The Money

SOSO will craft you a pair of custom-made jeans for as little as $99 (in a lightweight 10 oz ) although it is probably best to reckon with a bill for around $160 (€145) once you have selected your favourite denim and added a customisation or three. Similarly, the heavy-weights come in at around $240 (€220) with free shipping but plus any customs duties that you might be hit with.

$240 is nonetheless a not inconsiderable chunk of change.  But, at the end of the day, these are custom-made jeans and they are individually tailored from premium materials. And, the upshot is that they are truly one of a kind.

SOSO Clothing is available online and we hope to soon bring you news of their first European store opening.