Every denimhead has their own tale, that first piece of raw denim that started a lifelong obsession. This is the story of how a fortuitous find in the most unlikely of places led to a life in denim.

To tell this story properly, we need to step back a few years. Right back to the time when I thought that cost was a reflection of quality, a pair of boot cut French connection jeans were the epitome of style and fit and Selvedge or raw denim was not even a blip on my vocabulary radar. Yes, folks, this was a dark time in the wardrobe of Matthew Oliver Wilson. 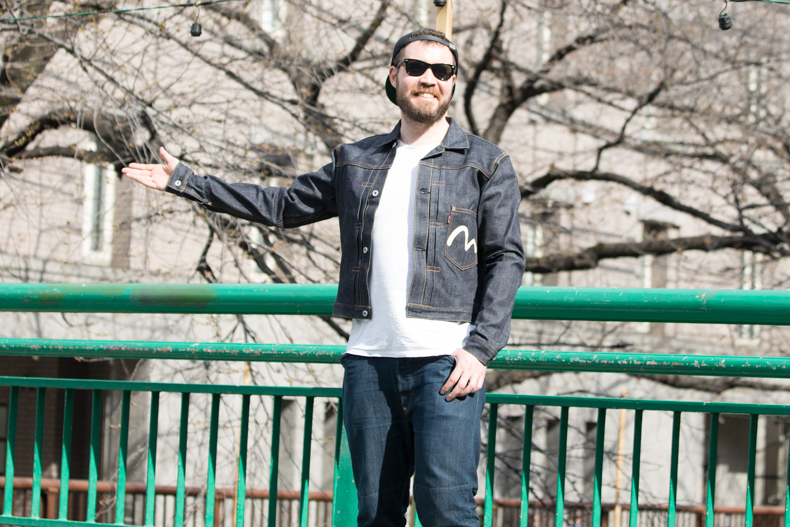 That’s the new jacket. In case there is any confusion 😉

Most of their wardrobe of shame was purchased in that Mecca to thrifty consumerism TK Maxx. For those of you lucky enough to not know, TK Maxx stores are dimly lit warehouseesqe totems to failed fashion lines, questionable style choices and every single glove you ever lost, all of which at “very reasonable” prices. In amongst rail upon rail of dross, there are those gems, or at least slightly less shit, shit that’s good enough to keep the penny-pinching shopper, and therefore the nation of Scotland (of which I’m a card-carrying member) coming back to again and again. It’s the meth addiction method of dressing yourself. It’s a little cheaper than cocaine, but far less glamorous and makes you look like shit.

Anyway, cut to four or five years ago, there I am fervently raking through the racks of the NeuKoln TK Max. Not really looking for anything specific, but practical purchases are not really the point of these places. I thumb past the t-shirts with 80s cartoon characters, which are fully intended to be purchased by fully grown men, past the worst of the worst jeans slightly disappointed they don’t have any of those dope FCUK bootcuts in again.

Then I am onto the jackets. Pleather crap, nylon crap, denim crap…. then I lay my hands on something different. It’s denim for sure, but it feels stiff, almost crisp. The colour is also totally different. It’s dark blue, like really dark blue and the tone is uniform all over the jacket. No variation at all. Then there was the branding. A single painted hill on the breast pocket. I recognized the brand from way back in the day. Evisu. I knew it was expensive and the guy I knew who wore it back then was a dick. Not the best brand association. But there was something about it.

I glanced at the price. 80 euros! Fuck, that’s not cheap. But there was something about it. I kept it in hand as I walked around the store raking through more and more junk. Trying on things here and there, trying the jacket on again, trying more, trying the jacket. After a while I’m quite convinced I won’t find anything particularly special, certainly, no boot cuts to be found. But I’m still clutching that jacket. But 80 euros! Fuck it. Treat yourself. I walk up to the cash desk, put down my hard earned cash and leave the store with that sick feeling only a Scottish person who’s paid for something can know.

The first steps into a new world…

When I get back home and take the jacket out of the bag, I started pouring over the details of the jacket. The construction, the denim. I had the hang tags to go on. They talked about Selvedge denim, raw denim. It led me to the Evisu website where I read more about Selvedge and raw denim. A quick google and I was on the forums, reading more and more. The fascination set in, and for five years, it’s remained. It’s taken me all over the world, given me friends, opportunities, adventures and now it’s brought me to this point. Standing in the Evisu flagship store in Tokyo Japan. It’s a funny thing, this ol’ life.

Now the Evisu of Japan and the Evisu you get over in Europe are really quite different things. One is part of the Osaka 5, those pillars of Japanese denim that paved the way for the wave of quality denim coming out of Japan, the denim is milled in Japan, the pieces manufactured in Japan and can hold their own with the best of the best. The other is shit and a travesty of denim. Weird styles, inflated prices, crappy denim and manufactured somewhere in China. It was the latter collection that this jacket came from, for better or worse. However, someone in the European team must be a denim head. Because this jacket was not that bad at all. An interesting take on a Type 1. Good, modern European fit and the denim has a brown weft, giving some interesting character. However, standing in the flagship store in Tokyo, you realize the depth of the divide. Evisu is not only a denim brand. It’s denim heavy but there are a plethora of garments from three-piece suits to golf wear. 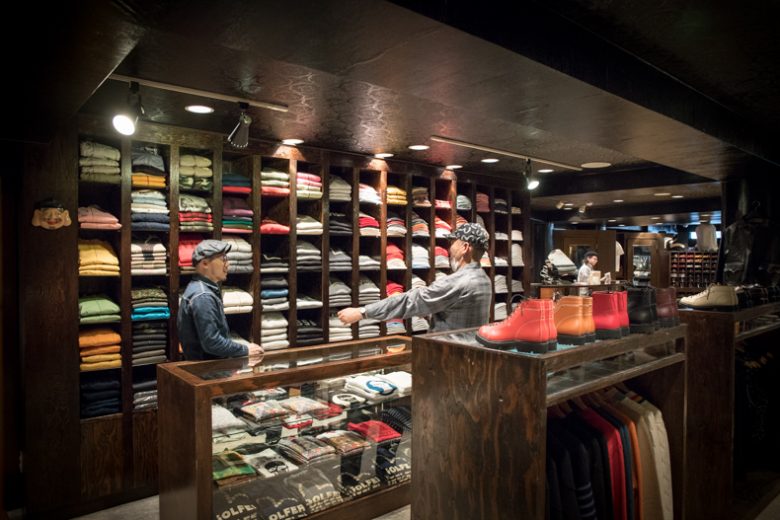 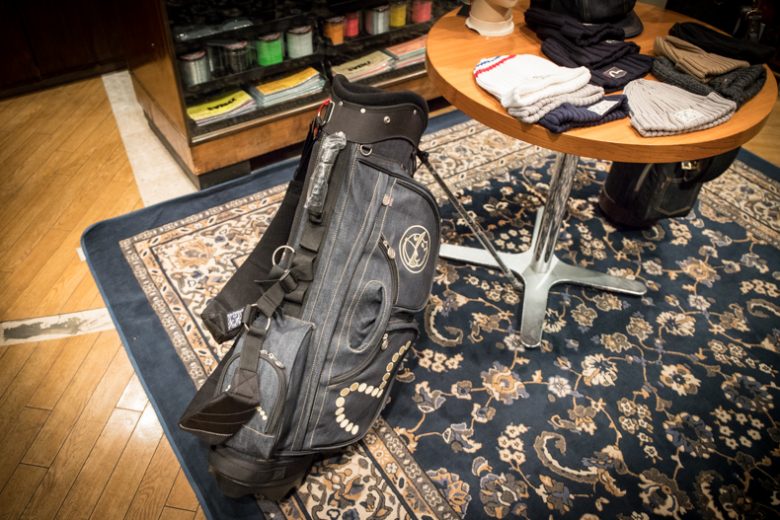 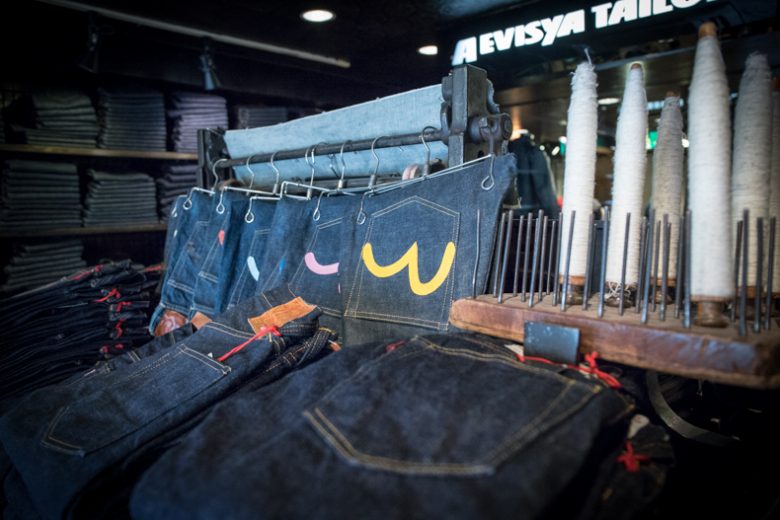 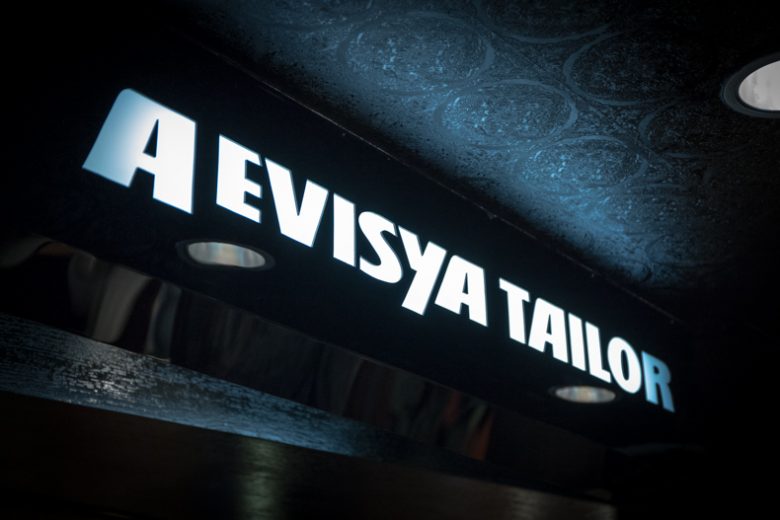 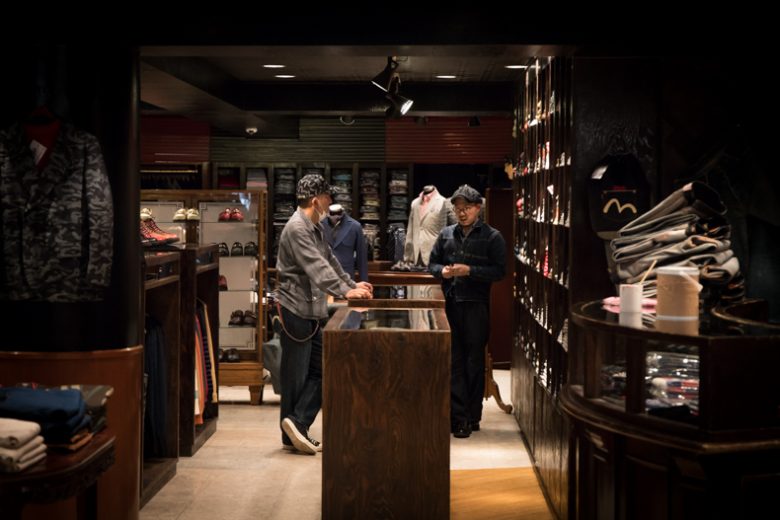 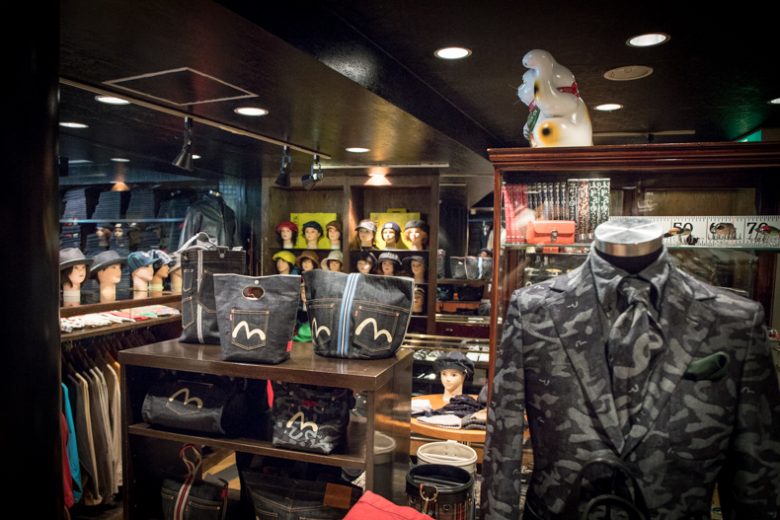 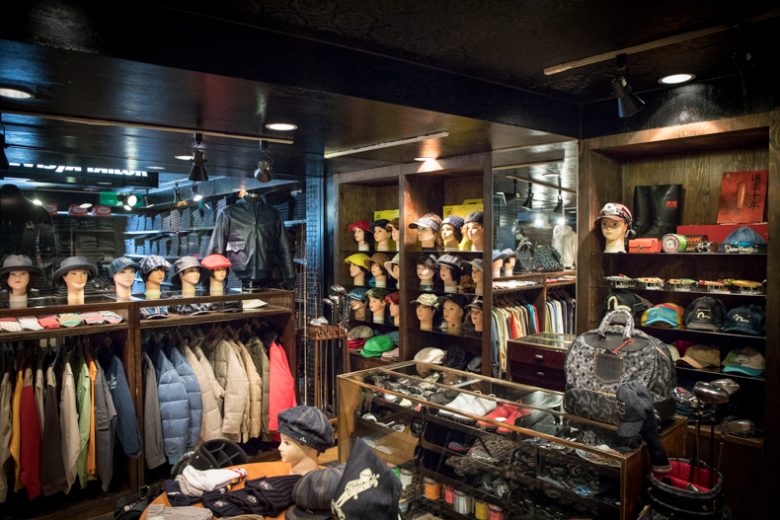 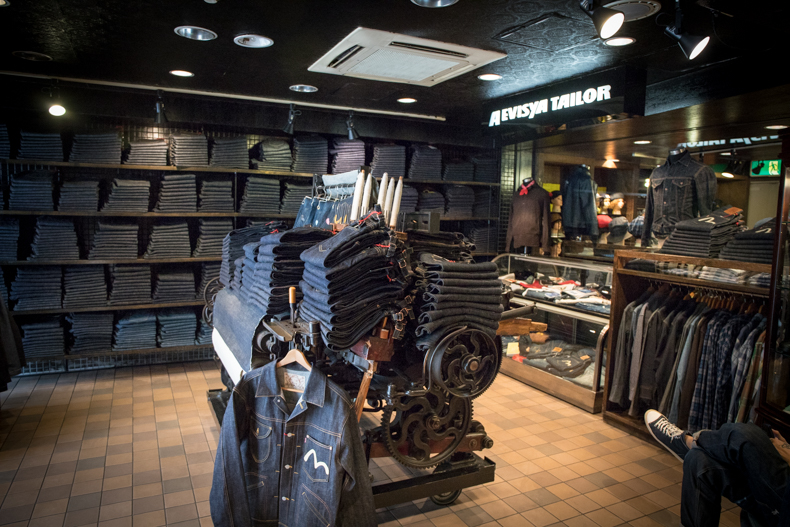 True to their roots though, as soon as you step into the store you are greeted by a shuttle loom stacked high with raw Selvedge denim jeans. But they are missing the signature arcuates that define the brand. A little disappointed I continue to browse. 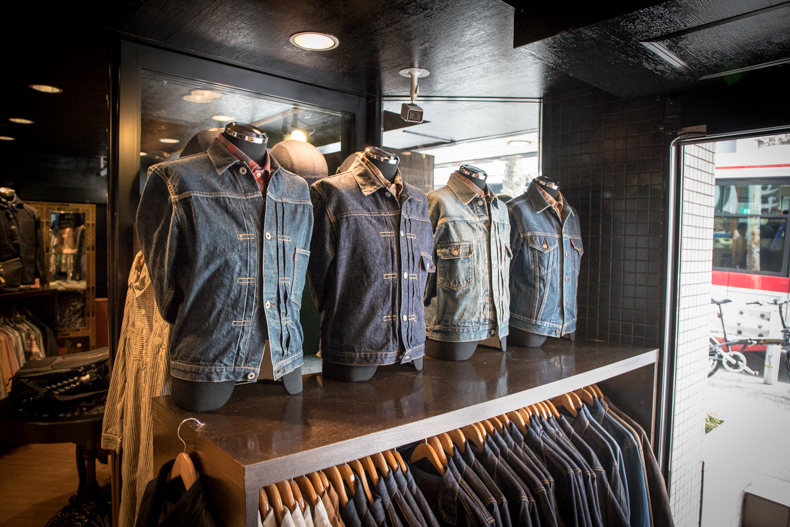 I find the jackets. Amazing reproductions of everything from the type 1 to the type 3 along with a chore coat. But no painted seagulls anywhere! Perplexed I ask the guy behind the counter. Oh, we paint those on for you. Any colour you want. We can also do any design you like. 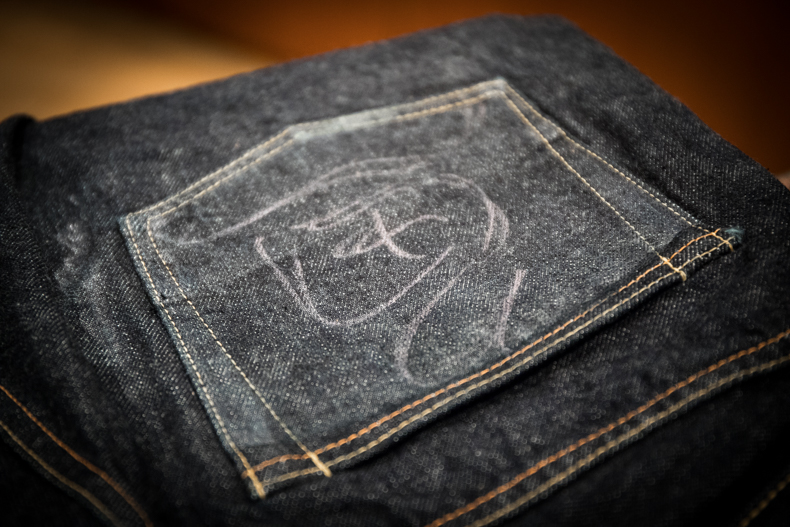 Should I, Shouldn’t I?

Now, this Tokyo trip was kinda last minute, and I’m on a tight budget. I’m travelling with my buddy Daniel and after this, we’ll head for a month to south-east Asia. The last thing I need is a heavy Selvedge denim jacket on Bali. But Daniel, who’s just as big a denim head as I am shoots me a look that says “dude, denimhead to denimhead, you have to get something”. And he’s right. It’s closing a loop, without this brand I literally would not be standing where I’m standing now and my life would look very different. And you know what, it’s not a pair of jeans I’m getting, I’m getting the Type 1. The jacket that fortuitous TK Maxx find was paying homage to. Now, this being Japan I’m an xxxxxxL size. The guy rummages around in the back and finds the one and only 42 in the store and tells me to come back in a couple of hours.

An Artist at Work 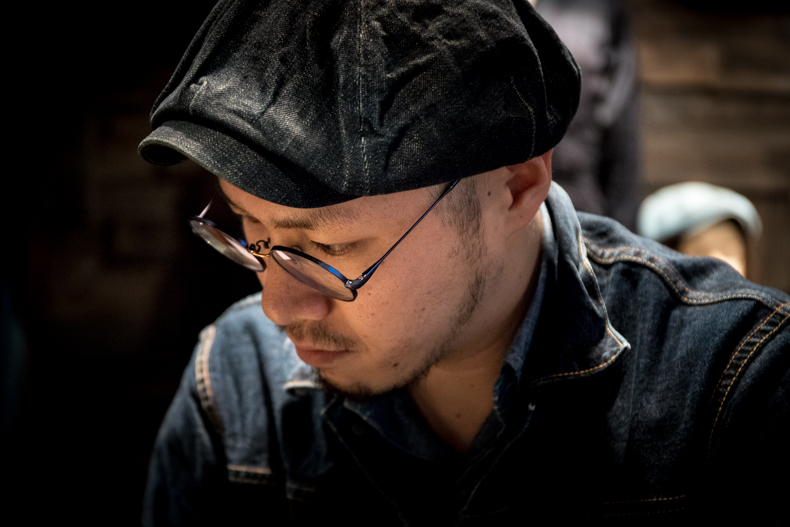 But I don’t want to miss this. I repeat her sheepishly ask if I could hang out and take a few pictures. Sure he says as he hands it over to the resident arcuate painter. Out comes a very un-vintage looking iron and hairdryer. A tin of what looks like wall paint and what looks like a paintbrush from the bin of a primary school, stumpy, chewed and encrusted. I’m sceptical. I’m also painfully aware that this is the only jacket in the store that is my size. If he fucks this up. I’m still taking it. 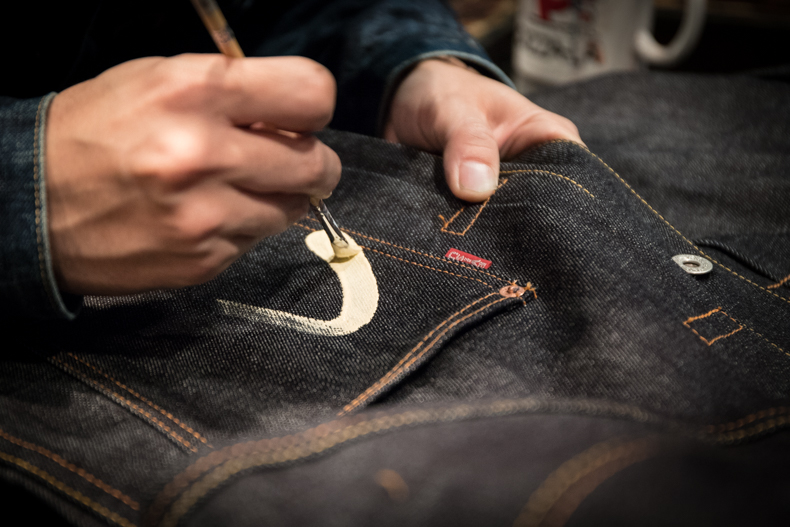 Expecting him to get out a stencil or at least draw out the rough shape I’m watching nervously as he just dips the brush in and gets going. Freehand. But this is Japan. The level of artistry in this country is on a level that we in the West cannot touch. Over the next five minutes. He paints on the famous seagull. Takes the hairdryer, hands it to the other guy, gives me a little bow and walks off. The other guy sits there drying the paint with the hairdryer for longer than it took to paint the arcuate.

It’s then expertly origamied into a neat little cube and I am given a choice of carrier. Paper or Plastic? Despite my environmental misgivings, I opt for the plastic bag from a purely practical point of view and also, I want a souvenir and the bag is dope.

Don’t Do Drugs, do Denim

Delighted, I leave the store. With an odd feeling in my gut. It is these small little coincidences that define life. Who would have thought that a seemingly simple purchase of a denim jacket would have had such a big impact? In retrospect, it’s been more influential than most jobs and my education. Funny that. But kids, stay in school and don’t do drugs, do denim!