The Roaring 20s In a Denim Work Shirt: bybeatle’s The Golden Nugget

Denim forum guru Andrea Baburske, more commonly known by her alias ‘beatle’, introduced her own jeans earlier this year. Now she’s ready with a denim shirt to match them.

The Golden Nugget round collar work shirt is inspired by the Golden Age of American culture. It captures the essence of an era and combines it with what Andrea loves most; denim. It’s a timeless piece that will make you look great wherever you go – and it will fade and evolve just like your favourite western denim shirt.

But how did Andrea decide to make a work shirt and not go for the regular western denim shirt?

She has plenty of reasons. 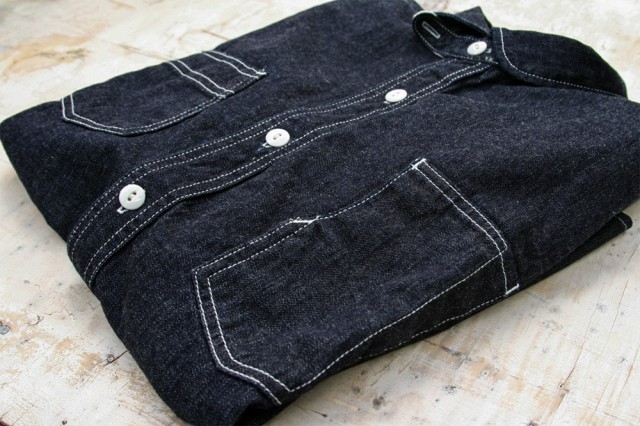 Andrea is a huge fan of pre-WWII Americana.

“It’s called the roaring 20s for a reason. Bowler hats and jazz music. It was a revolutionary era for the western culture. I sometimes wish we could travel back in time just to experience Paris, New York, or Berlin in those fabulous days; I’m sure it would be truly exciting.”

As much as the 20s and 30s were a thrilling stage for social changes it was also a key period for many garment style that affect today’s fashion and denim trends.

Andrea mentions the silhouette of a well-tailored men’s 3-piece suit. “Designed in the late 20s and still executed with the same recipe today,” she argues. Besides that, it was a time when new production technologies were introduced and gained popularity.

Still, her favourite garment from that era is the round collar work shirt.

“I would go as far as to say it is one of the most understated and most versatile garments out there. I believe that’s probably why the Japanese garment makers have such a soft spot for it – and I doubt there’s a true Japanese denim connoisseur who doesn’t own at least one of these.” 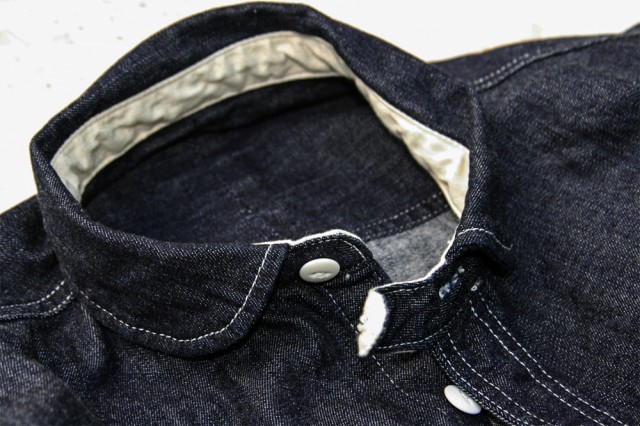 High quality denim “Made in Japan” by artisans

Just like the Volume 1 jean, the work shirt is made by TCB, an established garment maker in the heart of Japan’s denim centre; the Okayama prefecture.

The 8 oz. unsanforized denim with an unbleached weft is shuttle loomed. Andrea ensures us that the fading potential of the yellow-green cast denim should be quite spectacular. The shirt has been washed once so you shouldn’t worry about shrinkage.

Sourcing the denim was perhaps one of Andrea’s biggest challenges. After all, the fabric is the ‘key ingredient’ to each garment – and according to Andrea this is where you make it or break it.

Andrea wanted a denim with plenty of era-authentic character, texture and colour. It didn’t need to show off the selvage ID, as it would be lost on the round hem placket anyway. 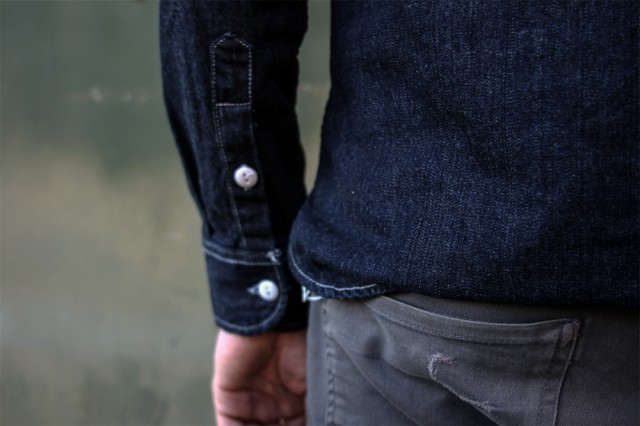 Choosing the unsanforized one wash solution

The choice of a one wash solution has many advantages. First, shrinkage of garments that are sold completely unsanforized is difficult to control for manufacturers. The temperature of the water, the water itself, and the time the garment is soaked all come into play.

Doing this with a pair of jeans makes sense as you can literally adjust the garment to your legs. But with a shirt you’re looking for something that is comfortable from the moment you put it on – at least that’s Andrea’s opinion.

“I wanted to create a shirt that feels like your favourite shirt from day one without all the stiffness and needing help to bend your arms. I think sometimes we become so obsessed with denim that we forget it’s foremost brilliant feature – pliability.” 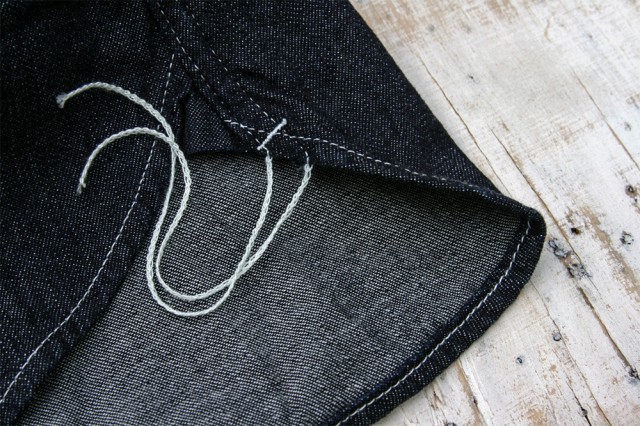 The chain stitch run off

Another characteristic feature of the Golden Nugget shirt is the chain stitch run off. It’s a feature you also often see on other high-end Japanese-made shirt.

Andrea compares the run offs to Marmite, the famous bread spread from New Zealand, “some people love it – some people hate it.”

“To me it feels like a sentiment; a bit like a reminder that a garment was sewn together and came to live with the abilities of an artisan and his sewing machine. A bit like leaving some trace evidence.”

Over the years, the chain stitch run offs have turned into a bit of a statement – one that says,’Hey, I was made in Japan!’ And if you don’t love it like Andrea does you can just cut it of.

The Golden Nugget shirt is now going into production and it’s arrival is scheduled for January 2014. Andrea is currently busy working on her next garment. Still, she doesn’t want to spill the beans until she’s holding it in my hands.

In other words, you can expect more from bybeatle in the future. Once it officially launches the Golden Nugget shirt can be purchased from bybeatle’s webshop.

In a final remark, should you be in London on December 14, 2013 you can meet Andrea in person at a “Merry Selvaged Xmas” party hosted by Rivet & Hide.

bybeatle, Japanese denim, Made in Japan