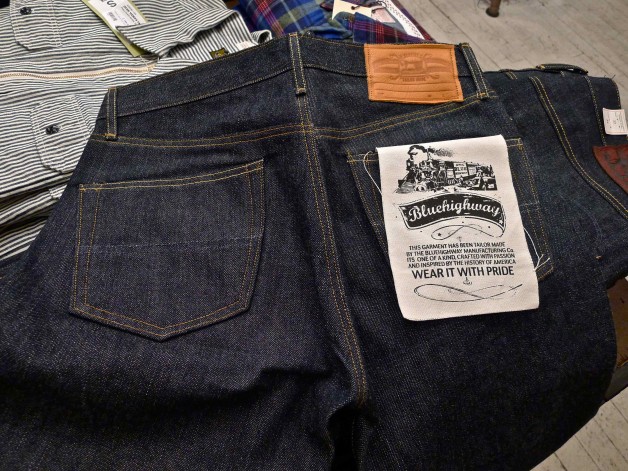 In the overcrowded market of vintage denim of the 21st century, it is becoming increasingly difficult for brands to make themselves noticeable. Pinpointing an overall tendency of the western consumer culture, many denim brands are downsizing and returning to the roots of the craftsmanship of making jeans. But very few are taking it to the extremes of the Blue Highway brand, where every pair is stitched by the two Luhanko brothers in their workshop located in the backroom of the Unionville store in Stockholm. This is the story of a very unique denim brand that makes every customer personally involved. 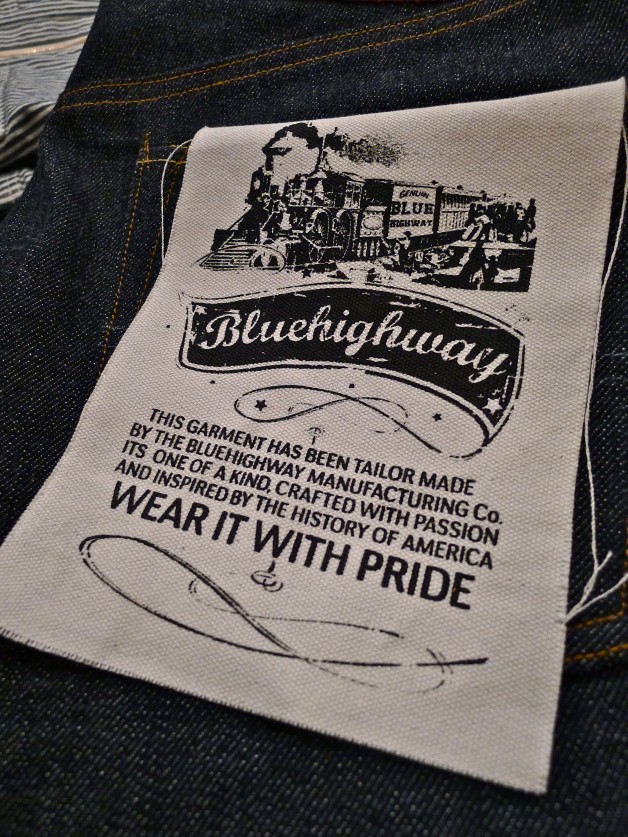 The Blue Highway brand was officially established about four and a half years ago when brothers Douglas and Hampus Luhanko began producing their own denim jeans. The Luhankos originate from Eskildstuna, approximately 110 kilometres outside of Stockholm in Sweden. After finishing high school, they started working in two of the JC stores in their hometown while at the same time they were exploring the denim history by writing a blog and collecting old vintage denim, mostly through purchases off eBay.

Through the great online auction site they met American vintage denim collector and author, Michael Allen Harris, and in 2009 they visited him in his home in Orange County, California. Together the three of them went digging for “the blue gold” in the Nevada desert. Essentially, the brothers have gained otherwise unattainable knowledge going through scraps of century-old workwear denim jeans, which is also clearly reflected in the product. Also, they are self-taught although Douglas followed a couple of sewing courses during high school.

The name of the brand mainly draws on inspiration from the American blues music of the 1920s up to the 1940s. However, it also refers to the path that the boys want to take with the brand by using the inspiration from the old days and transforming it into contemporary vintage products that are honouring its roots but looking ahead. 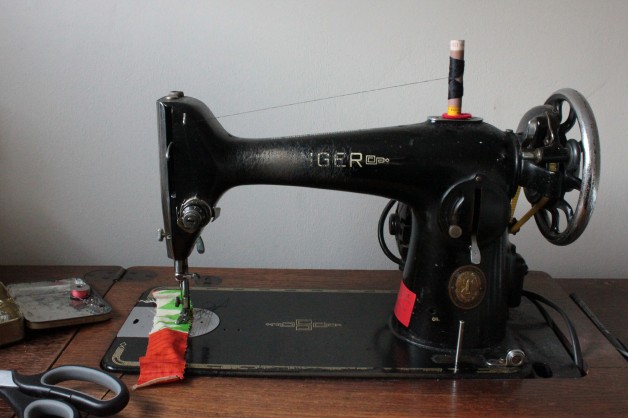 The essence of the Blue Highway brand is a reminder of the early denim days when every pair was made on one single sewing machine with one single thread. The first Blue Highway jeans were made on a 1950s Singer sewing machine (similar to the one above) that only does a single lock stitch, which is basically all you need. As a tribute to the Luhanko brothers’ heritage and what they started out with, they have paid their respect to the old sewing machine by placing it on the leather patches of the jeans. The patch is made in the store and the leather is not chromed, which will make it age beautifully. 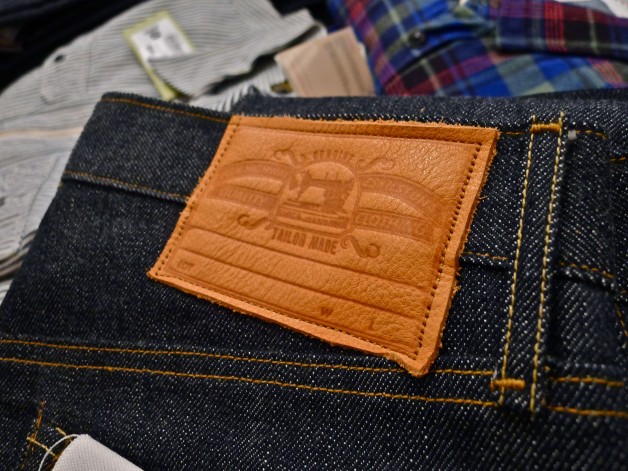 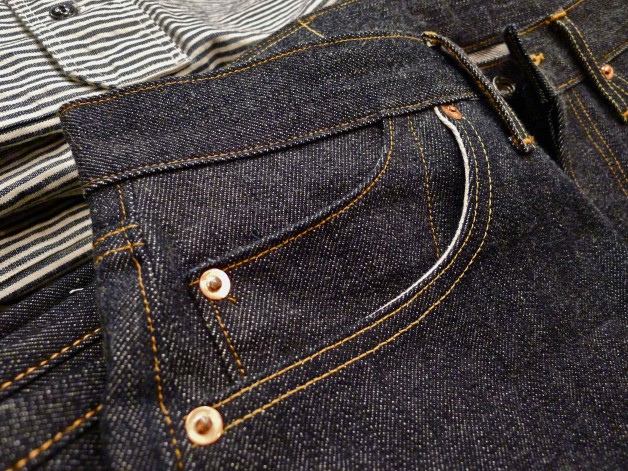 The Blue Highway boys don’t want to put an exact date on their jeans, but it’s no secret that they are inspired of what jeans looked like in the 40s and 50s. The coin pocket is a tribute to jeans manufacturers that struggled to invent fastening solutions up until 1890 while Levi’s had the patent for riveting workwear. Additionally, the design of the pocket makes it easily accessible as you can slide your finger down the seam to reach the contents of the pocket. It is also a detail that tells you that this is a pair of Blue Highways. The pocket bag cloth is very heavy and made from 100% cotton, and it’s deliberately picked out for it’s sturdiness.

The belt loops are rather slender, which is fundamentally a result of the machine that is used to sew them. This is how they come out, and fortunately the Luhanko brothers like the look of it. Unlike many vintage denim brands, Blue Highway jeans does not feature hidden rivets, which is an attempt from the Luhankos to make something that’s distinct from the traditional Levi’s replicas. 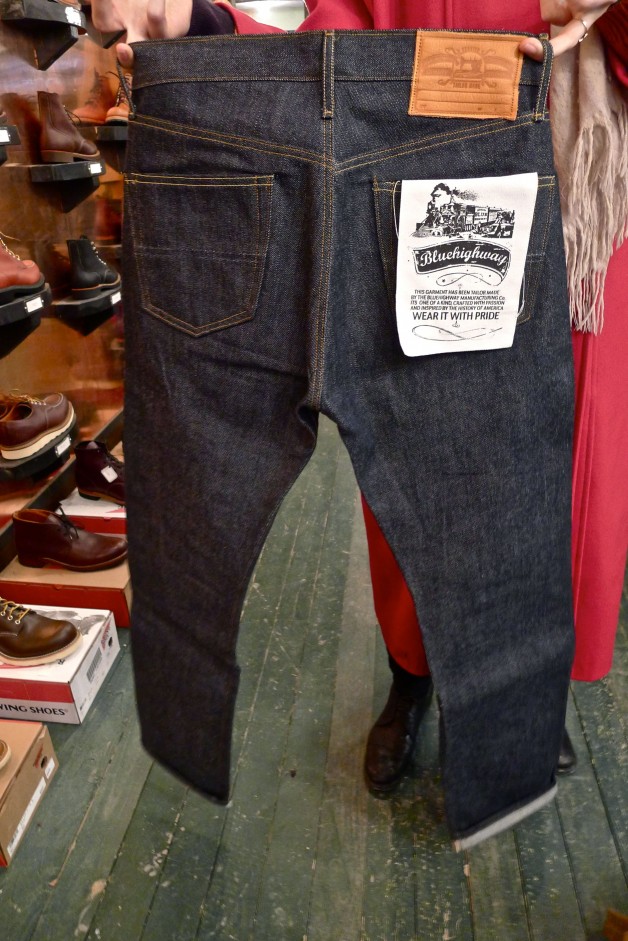 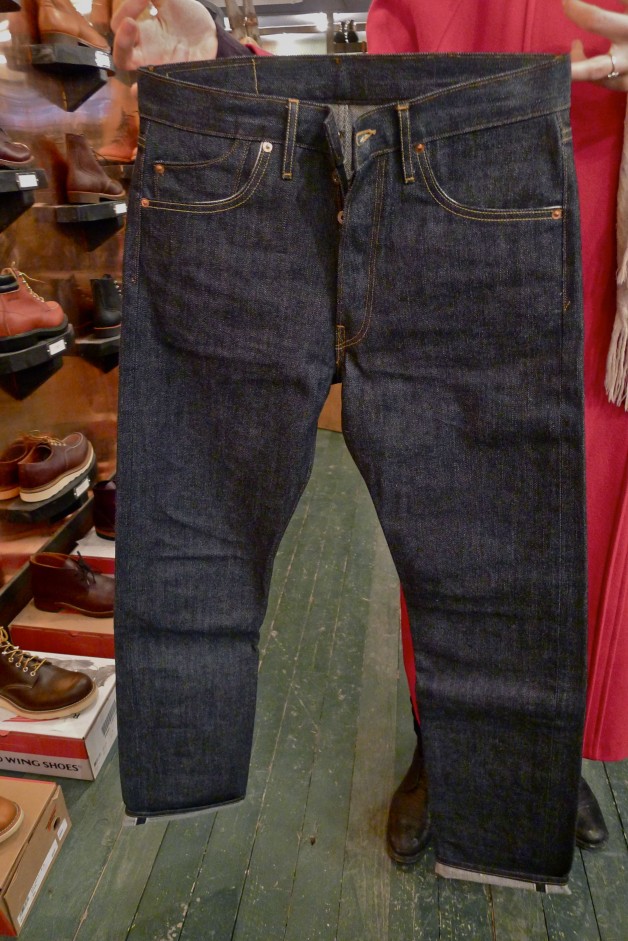 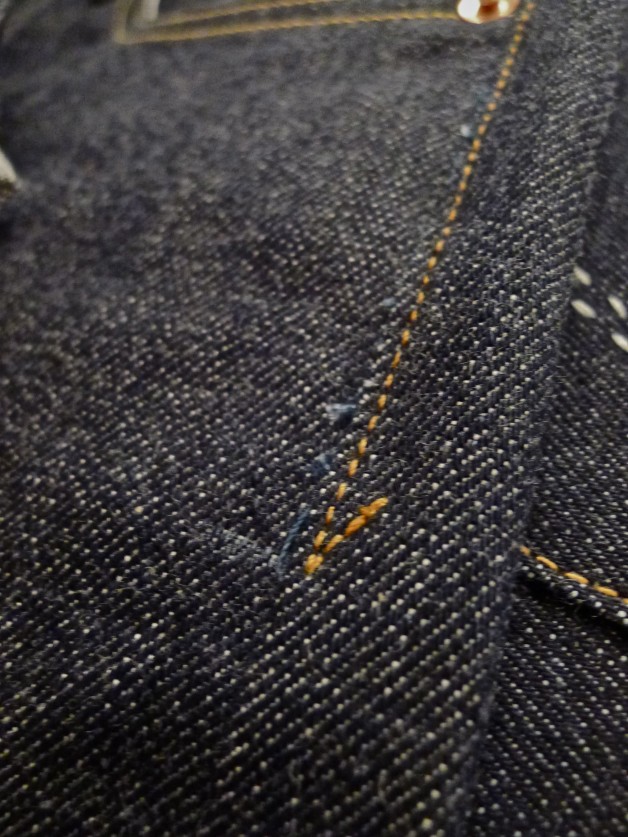 The stitching above is made deliberately to demonstrate that the Blue Highway brand is not about striving for perfection, but rather a symbol of personality. You’ll find similar detailing on the top corners of the back pockets. 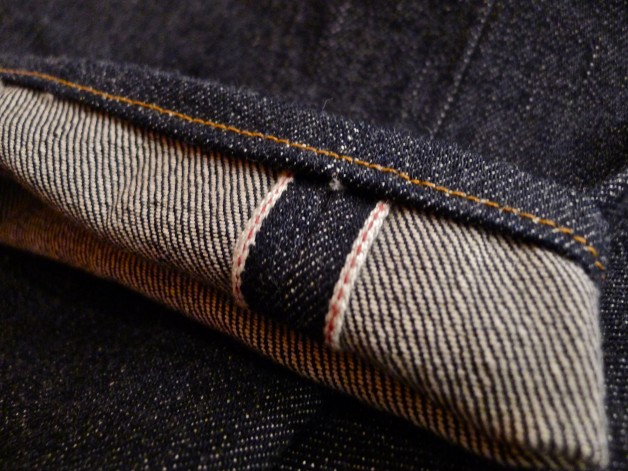 The jeans are sewn from different hand picked fabrics that Hampus and Douglas source from eBay and smaller denim mills. The fabric of the jeans in the pictures is a shrink-to-fit. 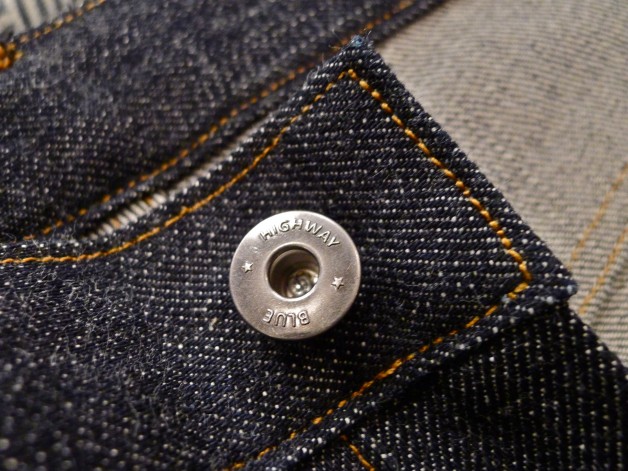 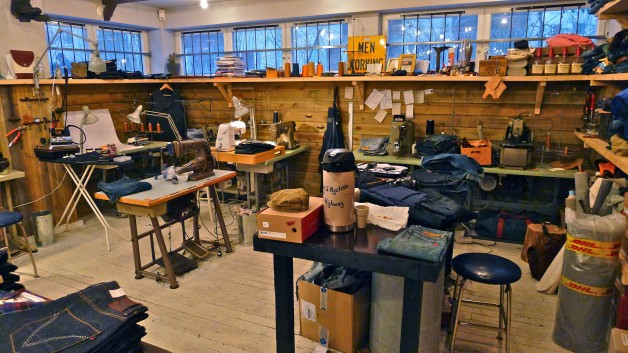 The production process is rather time consuming and their personal production record is 6 hours from fabric and thread to finished jeans for one single pair. They plan to make the process shorter when possible, but it all comes down to how well they know their different machines.

The machinery has been collected over the years and they made a big score when they bought a bartack machine, a button hole machine, an overlock machine (picture below) and a double needle machine for a very good price from a guy who used to make workwear in Sweden. The rivets on Blue Highway jeans are put in by hand as the brothers like the idea of keeping it simple. On the first order they did for Sivletto in January 2010, Douglas did all bartacks by hand(!), which took two hole days. 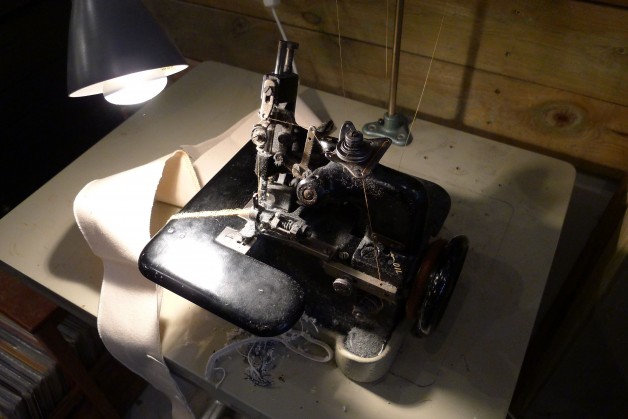 The retail price is 3000 Swedish kronas. When you take into consideration the working hours and passion put into every pair, the exclusivity of the fabrics that are used, and the very personal relationship that you will get to these jeans – and maybe to the Luhanko brothers – 3000 Swedish kronas is not asking too much. And the boys don’t really make any money from it.

As mentioned in the review of Unionville, Blue Highway has already done a collaboration with Pace, which was basically a modified Pace jeans design. This spring, Douglas and Hampus are launching a new collaboration with a coffee roastery and café based in Stockholm called Johan & Nyström. This time, the jeans will be handmade by the Luhanko brothers and will be inspired of the 1920s and 1930s workwear Dungarees. 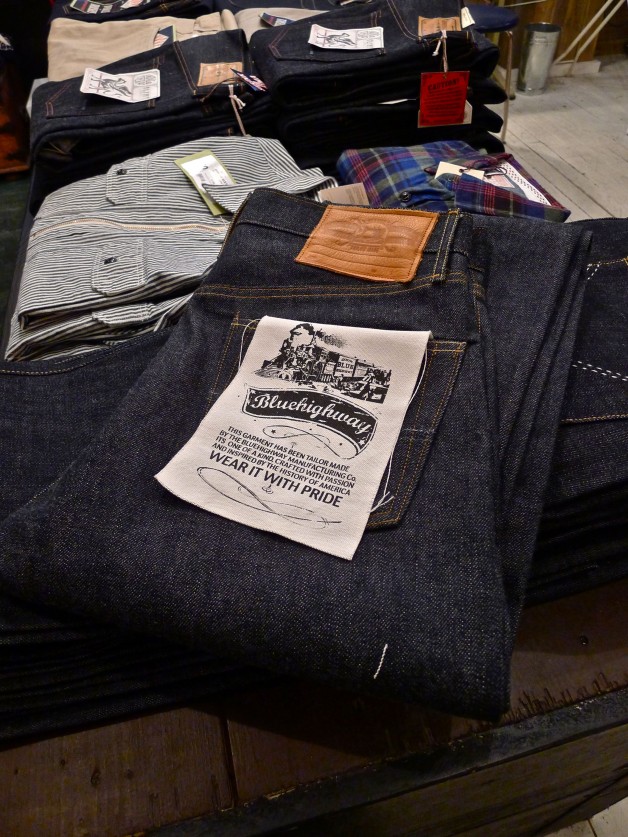