After months of people asking if they had a jean for guys with muscular thighs similar to The Greaser (high rise, large thigh, straight leg) but with a contemporary slim taper, Queens’ Left Field NYC finally decided to develop a cut for men’s men.

And, in honour or all that extra beef, they have named it after Charles Atlas, America’s favourite strongman.

Charles Atlas was born Angelo Siciliano in Acri, Italy in 1893. When he was ten, his family emigrated to America and he landed on Ellis Island not speaking a word of English.

Little Angelo swore he’d do great things but his prospects didn’t look too promising. He was a skinny, sickly, slope-shouldered boy; he was easy pickings for the bullies in his tough Brooklyn neighbourhood.

At age 15, Atlas was the classic “97-pound weakling,” and he later claimed that he really did get sand kicked in his face by a ripped lifeguard in front of a good-looking gal.

When he turned 17, Atlas finally reached breaking-point and made it his goal to change his body so that he could finally stand up for himself. He experimented with different exercises and developed his own fitness routine and, when he emerged on the beach after months of training, his friends were astonished at his transformation. “You look like that statue of Atlas on top of the Atlas Hotel!”, one exclaimed.

When he later legally changed his name, he paired that heroic moniker with “Charlie,” a childhood nickname.

A Choice Denims Including A Subtle Stretch

Even hard cases need a little comfort sometimes so Left Field NYC’s Charles Atlas is offered for the first time in a stretch selvedge. They have beefed up the typical stretch selvedge from 11oz. to a Collect Mills 14 oz who have wrapped the stretch-fibres in cotton so there is no apparent sheen.

The stretch is minimal since it’s only in the weft but for those that wear it, it’s just enough without looking like they’re wearing their girlfriends jeans.

They have recently added three new denim fabrics for the Charles Atlas and are currently cutting it in a 14 and 18oz Black Maria.

Photographer Robert Spangle decided to shoot the Charles Atlas with Justin down at the less than swanky surroundings of Muscle Beach, Venice California. What could possibly go wrong?

Robert and the team found themselves being threatened with an obstruction charge for shooting in front of the cops trying to arrest a guy with an open container. Figuring that prison stripes are ‘out’ this year anyway, they decamped down to the beach itself, a block down, and then got to ‘enjoy’ the spectacle of two Mexican guys pull a knife and belt respectively over some trivial matter or other.

Give them a click! We think you’ll agree that the shoot was well worth risking liberty, life and limb for. 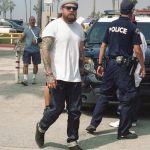 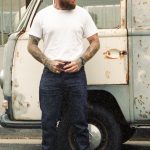 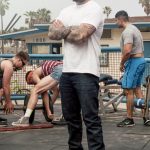 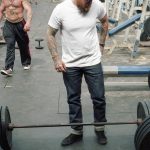 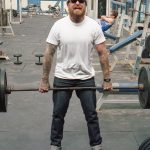 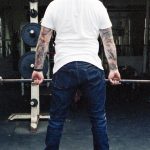 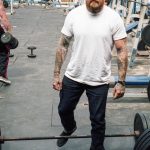 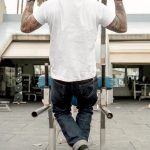 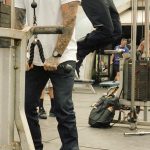 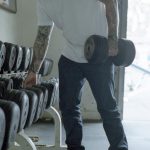 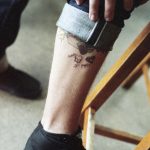 Reminder: Get your own Left Field NYC Charles Atlas jeans from only $180 online at Left Field’s own site and 15% off with coupon code “DH15”.