LD-Store: Finally You Can Get Proper Raw Denim In Vienna

Denim is the stuff that rebels are made of; at least it has always had a certain appeal to guys that won’t conform to conformity. In Vienna, there was a drought of quality raw denim and fuelled by his successful venture into leatherwear Martin Novak of The Lowdown on Denim decided to take matters into his own hands and opened the LD-Store. It turns out Rope Dye played a role in leading him to make this decision. We caught up with Martin recently to find out how.

The concept of the LD-Store is simple. You go there, you have a good time, get a beer or a coffee, and take home some excellent garments that you will love and wear for years to come.

Martin is blatantly honest when it comes to why he opened the LD-Store; he was fed up with the fact that it was impossible to get a hold of a decent pair of jeans in Vienna, and that all the stores there told him that there wasn’t a market for brands like Iron Heart, The Flat Head or Indigofera. He has proved them wrong:

“It was almost like when I made my first belt and thought ‘what can be so difficult about it?’”

He didn’t just jump in head first, but like the reasonable guy he is relied on his experience in the business. Still, it hasn’t been a bed of roses. His biggest challenge right now is to spread the word about the store and build a reputation locally and online.

“Actually, the Denimhunters article from last summer and the response it got triggered my decision to open a raw denim store in Vienna. The concept had already been on my mind for some time (I guess I got the idea in 2009), but it never materialised because of costs and location. After the DH interview all the pieces fell together. I partnered up with an old friend of mine and started bringing proper raw denim to Vienna.”

As Martin sees it, the timing was perfect; if he hadn’t done it some other denimhead probably would have. Although there were stores in Vienna selling raw denim already, they didn’t stock the brands he wanted.

For Martin it’s all about quality, sustainability, and style. And importantly it’s also about creating a space where the customer feels secure; maybe even at home. He takes customer service serious, and he busts his ass to get his customer what he’s looking for. 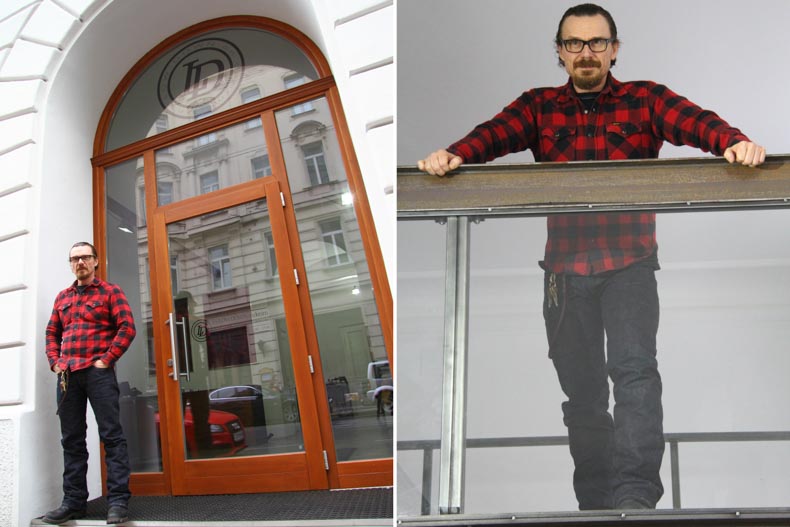 Like most denimheads, Martin has a strict routine when it comes to breaking in his jeans. With unsanforized denim, he soaks the jeans in hot water while he gets a night’s sleep. Then he wears them for 2 to 3 months before he wash them, and after that he’ll usually wash them every month or so (at 60°C, inside out, and on a very low spin cycle). With sanforized denim, the procedure is the same only without the initial soak.

He does not recommend he customers to not wash their jeans as this, in his opinion, negatively affects the durability of the garment. We are so with you on this one Martin, not washing your jeans can be the best way to ruin them!

“Right now I´m breaking in a pair of 16 oz. STPF Indigofera Clints and they feel great. But I love my Iron Hearts, Flat Heads, Blue Blankets and all the others I’ve got in my closet.”

The list of brands is both long and impressive with names such as Alexander Leathers, Chippewa, Wesco, Jack/Knife Outfitters, Eat Dust, Pike Brothers, and many more in additions to the three denim brands mentioned above. Of course, Martin also sells his own leather products.

Indigofera, Iron Heart, The Flat Head, The Lowdown on Denim

A Shout Out For Our Friends In The North!Shop